More than 244,000 U.S. troops have been diagnosed with some form of brain injury over the past 12 years, according to Pentagon statistics.

They are the most common injuries among combat veterans of Iraq and Afghanistan, and yet little is known about how to treat these wounds or cure the illnesses that result from them, says Peter Chiarelli, retired four-star general and former vice chief of the Army.

For a nation that takes pride in taking care of its wounded soldiers, he laments, it is a shame that the so-called invisible wounds of war get so little attention.

Chiarelli is now the CEO of a nonprofit organization, One Mind for Research, that is hoping to accomplish what the entire civilian and military medical communities have not: Find effective treatments and cures for traumatic brain injuries and post-traumatic stress.

One Mind for Research is seeking to raise $100 million so it can begin enrolling up to 5,000 patients for a two-year study. Chiarelli, who was tapped for the job because of his relentless advocacy for TBI research when he was vice chief of the Army, splits his time between his home in Seattle and his office in the other Washington, where he is honing fundraising efforts on wealthy defense contractors.

He is convinced that private funding can propel research faster than government programs. “Government is too slow,” he says in an interview. And even if Congress appropriated $100 million, it would end up dividing up the pie into many pieces in order to satisfy multiple constituencies, which would dilute its benefits, he said.

Private philanthropy is a cutthroat business these days, with hundreds of nonprofits competing for shrinking pools of corporate donations.

Chiarelli believes that he has a strong case to make for why the nation’s top corporations — and especially Pentagon contractors — should step up and provide the bulk of the $100 million he needs to get this project moving. Suppliers of military equipment are “one of the groups that I think should help us,” says Chiarelli. “I’m not saying they are responsible” for troops being injured, he adds. “However, many of them made a heck of a lot of money over the past 10 years … and have a moral obligation to assist these soldiers and make sure we do everything we can to take care of them.”

A hundred million dollars is a lot of money by most standards, but Chiarelli knows first hand what the Army spent on war equipment over the past decade, which is in the hundreds of billions, not millions. Major defense firms these days don’t talk much about all the money they made from the wars, Chiarelli says. “All they’re talking about is how worried they are about sequestration. But the last 10 years weren’t too bad. … We would like to get some sustained commitment from the defense companies.”

Chiarelli has recruited two prominent brain-disease specialists to head the research. The principal investigator in charge of One Mind’s traumatic brain injury study is Dr. Geoffrey T. Manley, chief of neurosurgery at San Francisco General Hospital. He is building a network of eight medical facilities where patients will be enrolled. Examining and tracking each patient over two years will cost between $8,000 and $10,000, Chiarelli estimates. The $100 million will cover the cost of analyzing 5,000 patients and creating an online portal where academic researchers and corporations can share information. He would like to see the research expand into medical facilities outside the United States. Potential locations are being scouted in Canada, the United Kingdom and China.

In charge of the post-traumatic stress research is Dr. Charles R. Marmar, chair of the psychiatry department at NYU.

Corporations in the pharmaceutical and medical imaging industries also are being invited to participate, says Chiarelli. It’s a “win-win” for everyone, he says. “Rather than each company going down a rat hole in their research, not telling anyone and letting another company go down the same rat hole, companies can work together” and share resources.

Chiarelli says the results of the research will not just benefit American soldiers and veterans, but also the much larger population of brain-disease sufferers. One Mind has estimated that 10 million people worldwide — 1.5 million in the United States — have some form of TBI. But soldiers and veterans are affected more than any other sector of the population, says Chiarelli. When brain injury and post-traumatic stress co-occur, as they often do, symptoms may be difficult to disentangle, and both conditions increase the risk of depression, he says.

“Early evidence suggests that as many as 20 percent of the approximately 1.64 million U.S. troops returning from deployments to Afghanistan and Iraq show symptoms of post-traumatic stress or major depression,” he writes in a fundraising letter.

“I was frustrated during my four years as vice [chief of the Army] by our inability to take care of these folks,” Chiarelli tells National Defense. “The most prevalent wounds of these wars are those we can’t see. We don’t have good diagnostics and we don’t have good treatments.”

The Defense Department has poured millions of dollars into neuroscience research, but that is still not nearly enough, he says. “We are 40 to 50 years behind the science of the rest of the body.”

The Army several years ago developed blast sensor packages that soldiers would wear on their bodies — two on the chest and two on the back — to help assess the effects of explosions, including possible concussions or traumatic brain injuries. An earlier version of the sensor pack did not work as promised, says Chiarelli. The Army’s Rapid Equipping Force recently announced the deployment of an updated version that has proved successful. “I was the one who pushed them to do it,” says Chiarelli. “What’s sad is that we’ve had vehicles blown up for how many years? And we are just now deploying blast sensors?”

Medical issues aside, Chiarelli also worries about the social and economic impact that brain injuries and post-traumatic stress have on veterans. The stigma associated with these issues has not gone away, he says.

A series of mass-casualty shootings by former and current soldiers — both in the United States and most recently in Afghanistan where an Army sergeant in March alledgedly shot 16 Afghan civilians — could have a chilling effect on companies hiring veterans, says Chiarelli. “I worry about that.”

President Obama and Vice President Biden have launched various “hire a veteran” efforts over the past years, and have enlisted Fortune 500 CEOs to employ returning troops. But these high-level campaigns do not necessarily eliminate anti-veteran biases in the workplace, says Chiarelli. “It’s one thing for the CEO to say, ‘let’s hire a veteran,’” he says. But when it comes down to a human-resources manager making a decision between two equally qualified candidates, if one of them is a veteran who served multiple combat tours, a manager is likely to wonder about the veteran’s mental state, Chiarelli says. “Do I want to take a chance on a kid with multiple deployments, coming back and doing something crazy in the workplace?” is what pops in the minds of many managers, he says. “I’ve been in companies where veterans are hiding the fact that they’re veterans. … They feel it has a negative impact on their careers.”

Another reason why the military needs brain injury research to advance is that it will be spending billions of dollars on disability benefits for troops that may have been wrongly diagnosed with post-traumatic stress, says Chiarelli. In some instances, soldiers have been known to fake symptoms of PTS syndrome in order to qualify for medical retirement. He cites an ongoing controversy at Fort Lewis, Wash., where doctors at the Madigan Army Medical Center overturned the PTS syndrome diagnoses of hundreds of soldiers and changed them to “personality disorder.”

Congress passed a law five years ago that gives troops diagnosed with PTS syndrome automatically a 50 percent disability rating. “Fifty percent is the magic number because you get Tricare for life,” says Chiarelli. “They did that for a disease for which we don’t have good diagnostic tools. That means a certain percentage of the population is going to feign the symptoms in order to get the disability. … It happens.”

A diagnosis of personality disorder only provides a 10 percent or less disability rating, which dramatically lowers a soldier’s benefits. Following the Fort Lewis firestorm, the Army is now reviewing every case that was reversed dating back to 2001. Because the science is so imprecise, says Chiarelli, it is not clear how the Army can decide whether the doctors were correct in their judgment. “In reality what you have is a professional disagreement,” he says. This only furthers the case that better research is needed, says Chiarelli.

To reach $100 million goal, One Mind for Research is not just courting defense contractors. It also is hoping to tap into Hollywood’s deep pockets. One Mind co-founders Patrick J. Kennedy, former Democratic congressman from Rhode Island, and Garen Staglin, a prominent venture capitalist whose son has struggled with mental illness, have brought actor Tom Hanks on board as host of a Sept. 19 fundraising gala in Beverly Hills, where a table for 10 goes for $100,000.

Chiarelli says Kennedy and Staglin are determined to make One Mind for Research the American Heart Association for diseases of the brain. 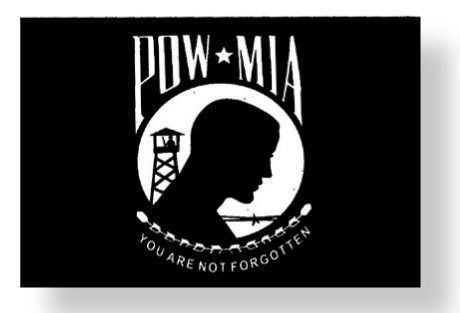